Q. Is the library haunted?

WILMINGTON, NC (WWAY) — This week’s Throwback Thursday sounds like something straight out of Ghostbusters. 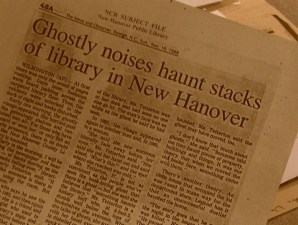 The New Hanover County Public Library in downtown Wilmington is home to at least 2 playful spirits, one of which is still keeping up her studious ways even in the afterlife.

The Researcher, as she is fondly called, has been known to play tricks on folks in the library. She sometimes will move things around or turn books backwards on the shelves. Some volunteers have even reported being able to see her walking through aisles with the book cart. Library staff will sometimes hear rustling pages late at night and find the last reference book The Researcher was using left out on a table.

Another ghost that walks the halls of the library is said to be that of The Colonel. He was a lieutenant colonel in the Third Cavalry, Forty-first North Carolina Regiment during the Civil War. A portrait of The Colonel, who even served as mayor of Wilmington, once hung in the library. Folks say the painting would move around the library when no one was there. Some say they can sometimes hear his boots walking around on the upper floors.